Blown filmWhat is a blown film?

Blown film typically consist of polyethylene as HDPE, LDPE, and LLDPE. But a variety of plastic material can be used.

The plastic raw materials are heated and extruded, then go through a ring die and are blown into a vertical film bubble, where it is cooled using a cooling ring. The film can be single layer or multi-layer film, also called co-extruded blown films. The product that comes out of this process is a film in tube form, which can be used for bags and sacks or it can be slit to be used for sheets.

Euro Machinery buy and sell blown film extruders, which can produce the plastic film mentioned above. We have several types of used and second-hand extrusion lines available, which can produce blown film, and we have many years of experience of buying and selling extruders and equipment for extrusion. The extruders we take in are in good condition, and many of the machines we sell are still in production, meaning that our customers can inspect the quality of the machine and the maintenance level. We have many different brands in our data base. 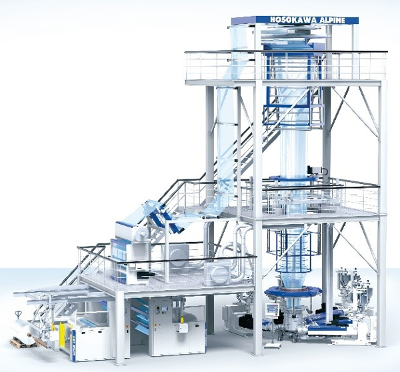 A drawing of a Hosokawa Alpine extrusion line

Cast film are also produced as mono- or multiple-layer films on cast film extruders. Cast film are extruded using a flat die, and are stretched in a horizontal production process, and cooled by a cooling roller. The materials that can be processed are PET, PP, LDPE, HDPE, PS, PLA, and more.

Cast films can also be biaxially stretched, and this kind of cast film line processes BOPET, BOPP, BOPA, BOPS, BOPLA, and more. These films have a certain kind of high tensile strength along the film and to the sides, end-products with these characteristics are: Highly transparent films, films with low seal temperature, high-barrier films, high-density shrink wrap films, adhesive films, synthetic white films, films for technical and optical applications.

Euro Machinery buy and sell cast film lines to produce e.g. wrapping material and sheets. Many of the machines that are available through our database are well-equipped, and can be inspected in production. We have a variety of brands represented with regards to the cast film machines, to mention a few: Battenfeld, ReifenhÃ¤user, OMAN, Bandera, Colines, ER-WE-PA Davies, Dolci and Tecnocoating. There are cast lines available that can produce stretch film and multi-layer films.

If you have any question regarding film production and machinery please do not hesitate to contact Euro Machinery, we will be happy to hear about your inquiries.